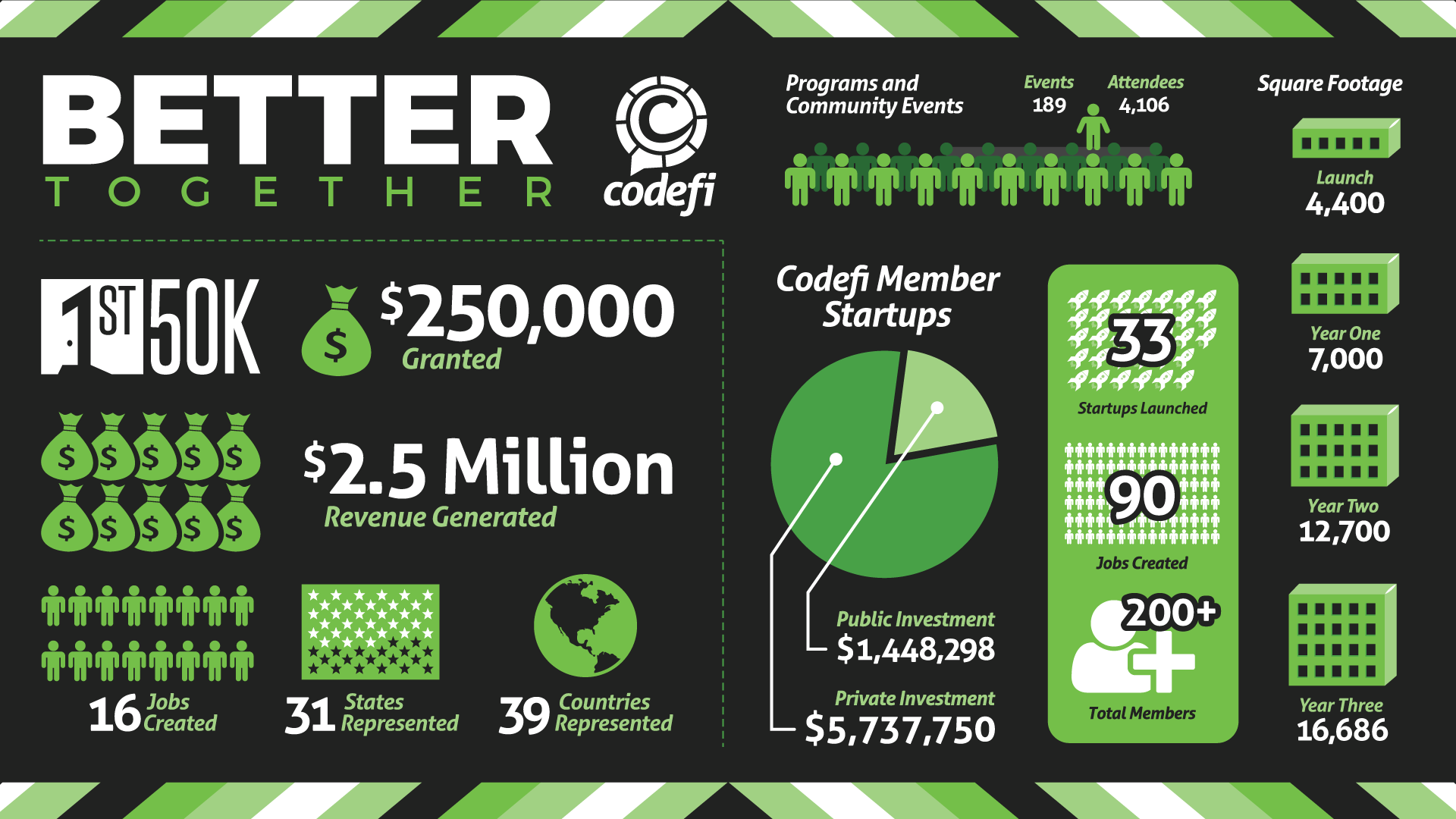 On November 7, Codefi turned three years old. That’s when we typically take some time to look up and check out the progress we’ve made since we started in 2014 and within the past year.

When you think about it, three years isn’t really that long. If you’re wondering, it’s just over 1,000 days—or 6,000 hours of work for the average employee.

But “average.” Average is shit.

We can confidently say we’ve put in more than 6,000 hours of work around here. We are still a startup, after all. And we’re generally too busy with our heads down working to tell our own story. But there has been some serious progress made after just three short years. So, we’re going to take some time to toot our own horn.

In the past three years, we’ve used fairly limited resources to create and grow a community of incredible people, working with them to make a pretty significant impact in our region.

Since inception, one out of ten Codefi members has launched a startup. Those startups have received over a whopping $7 million in public and private investments. And, 90 new jobs have been created from that. We’re averaging 65% growth in square footage every year. By early 2018, we’ll have 250 active members filling three floors of the Marquette Tower, the historic building in downtown Cape that was in shambles just over a year ago, mind you. Talk to any person that calls Codefi home and they’ll tell you the energy, synergy, and atmosphere of the space and community is astounding.

Who knew? Workplaces don’t have to suck.

Whether it’s from working by example or collaboration between members here, it’s clear that being a part of this community does wonders. Here’s the proof:

Are YOU involved in a startup? Are you an entrepreneur or in a business that wants to see serious growth? Or maybe you just want to be around like-minded people who don’t settle for ordinary. Look at those kick-ass numbers. Codefi is the place to be if you want to work with and around people that shut up and make it happen.

As for programs, needless to say, the collaboration between for-profit companies, non-profit organizations, and government agencies has started to create an ecosystem that is already producing serious results.

Since mid-2015, the 1ST50K Startup Competition has granted $250,000 to startups that are located or relocate operations here. Those startups have generated $2.5 million in revenue and created sixteen new jobs in just two years. There’s no question that we have and can attract innovative companies and talented people to this region.

The Marquette Technology Institute has adults going from no programming knowledge to high-paying, entry-level jobs in tech within 20 weeks. The annual mean wage for developers in our region is over $85,000, so this is huge. And kids are learning to code.

The Marquette Tech Foundation recently made the announcement of a $1,000,000 campaign to invest in kid’s futures and provide computer programming opportunities. That would be one hell of a goal if starting from scratch, but there are already $400,000 committed. In 2018, you will see numerous youth coding days, at least four summer camps, and since they have partnered with GlobalHack, the introduction of a Youth Code League and a computer science fair.

Three years is not a long time. But when you look at the impact for the region with such little resources used, you can’t help but be in awe at the progress already made. Yet, here’s the thing...this stuff is not easy. It’s pretty damn hard, actually. It takes a lot of hard work, priceless time, and energy. And to be honest, so far it has been done by a small group of people willing to put in the work.

So, this is our birthday wish, if you will—a call to action. To you. For you, and your community, and the next generation. We need your help. We need you to get off the sidelines and get involved. We don’t need any more people paying lip-service. And we can only imagine how big those numbers above could grow and how much of an impact we could have if more people got their hands dirty.

Want to know how? Come talk to us.

As Dr. James Stapleton, our founder, said just over three years ago, “If Codefi is a success, our members will grow. Their businesses will improve. People who have always dreamed of starting a business will see it happen. We’ll help people not only start businesses, but start businesses that are scalable, that are profitable, that grow. And we won’t really stop until we know for sure that’s going on here.”